Cijin or Qijin Island is one of the smallest part of Kaohsiung. This island is becoming popular to those who travel in South for its seafood, surfing and historic monuments. A day tour in Cijin Island is recommendable if you want to escape from the skyscrapers of Kaohsiung proper.

Cijin Island tour was not part of my original plan but I read some blogs that it is worth the visit. So, after a breakfast in my hostel and searching for some itinerary online, I hit the road to travel to Cijin Island.

How did I get there?

From Sizihwan MRT station, I searched for the exit Gushan Ferry Pier. It was a 10 minute walk from the MRT station to the pier. When I arrived at the ferry station, there was a short queue of passengers waiting for the ferry. I paid using my EasyCard to ride the ferry.

The ferry is jam-packed with tourists and locals with their small vehicles. It took me 5 minutes to cross from Kaohsiung proper to Cijin Island.

Where are the places I traveled?

Upon arriving at Cijin, there were colorful motorcycles, bikes and electric bikes for rent. There are vehicles for couple or a group of four. 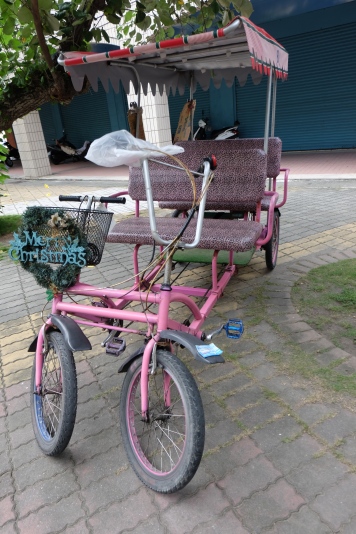 I would like to rent one but I do not know how to use anything of those. Thus, I decided to explore Cijin Island by foot. I did not know that walking around Cijin will be very exhausting but I enjoyed it! 🙂

This is the nearest attraction you can visit at Cijin Island after Cijin Market. I just followed the path of all of the food stalls and reached the beach after 15 minutes. It was a sunny weather when I arrived at the beach! 🙂

It was a nice day to swim as well and since it was a Saturday when I visited Cijin, there were families enjoying the beach. It seems the beach is free for everyone. There are shower and rest rooms as well.

There were beautiful sand sculpture at the beach, perfect for picture taking if you do not want to swim. 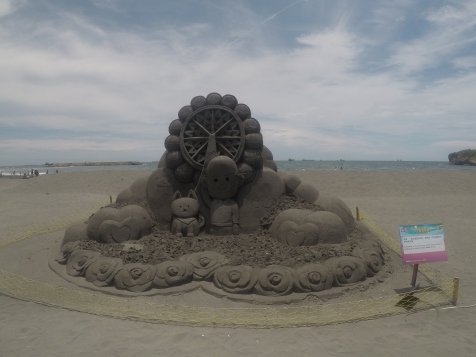 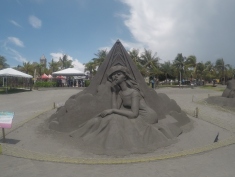 One fair lady in Cijin 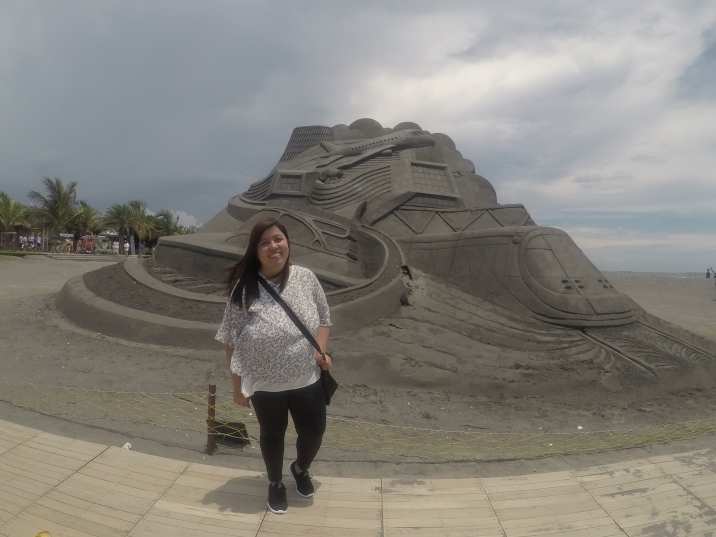 The Seaside Park was such a breath of fresh air for me after seeing too many skyscrapers from Taipei and Kaohsiung. 🙂

From the Seaside Park, I walked for 25 minutes to reach the Rainbow Church. This is an art installation at Cijin in front of the sea. I actually looked for a Church near the arch but I found nothing. As per locals, the arch is created just to attract tourists in Cijin Island.

There is another pointed architecture beside the Rainbow Arch to take more photos. 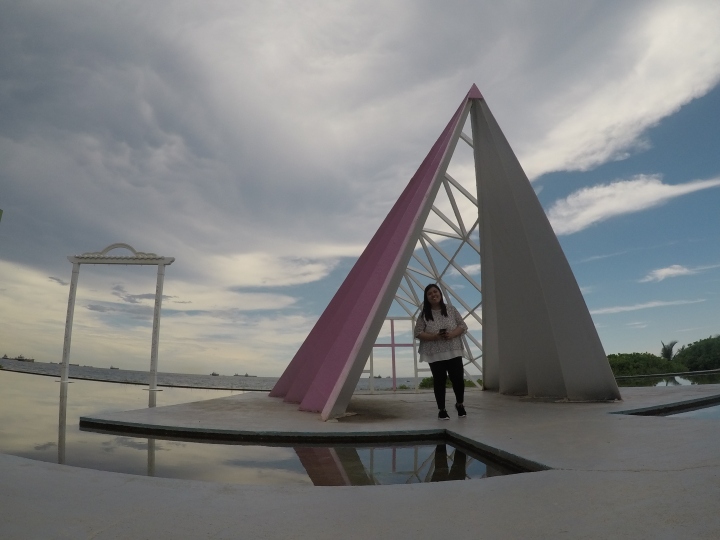 Good thing, I can turn my monopod to a tripod to have my photos taken. I spent more than 20 minutes in this area to take different photos but I guess these architectures are too photographic! Tourists keeps on coming to take photos, so am I! 😀

After lining up with other tourists and travelers many times, I left this place with the question, “Where is the Church?”. Hahaha.

Beside the Rainbow Arch is the Shell Museum of Cijin Island. Since Kaohsiung is a coastal part of Taiwan, different kinds of sea creatures including shells are the famous attractions in the South. I haven’t been able to enter the museum itself since I think it was close on a Saturday. Yet, the pieces outside are a bit of the things you can imagine inside the museum. 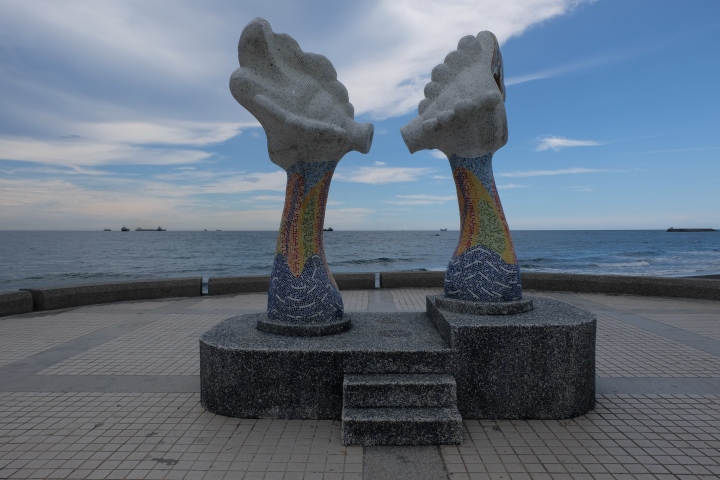 To see the big shell structure, I have walked for another 10 minutes. By this time, my feet were sore and I just want to sit down. I wanted to go back at the ferry station and stay in my hostel. I actually turned back the other way. But it was not the right time to be lazy, I am travelling and must explore! ❤ 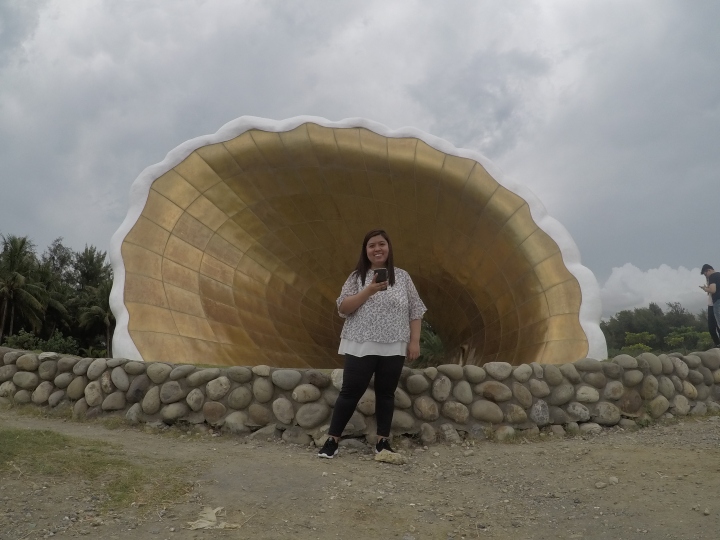 I wandered why those who rented electrical bikes still go along the way after the Cijin Shell Museum. I remembered that there is another place to see – the Windmills!

So, after resting, I walked again to see the windmills. It was a tiring walk, sun is shining with a bit of rain shower but I have to go further.

Need to burn all the fats. HAHA. I was on my 30 minute walk but I cannot still see the windmills. I even walked on some like of a forest but the windmill is not yet there.

After walking for 40 minutes, I cannot still see the windmills. I passed by the Taiwan Hellships Memorial. It is a memorial place to remember the thousands of Allied prisoners of war who were transported to Taiwan from 1942 to 1945 by the Japanese ship known as “Hellships”. The ship contains prisoners of war who were starved to death, neglected when sick, murdered but most of them were killed when a bomb dropped on the ship by Allied forces.

In January 1945, one of the hellship named Enoura Maru was bombed at Kaohsiung harbor killing over 350 prisoners of war. Their remains were buried on a mass grave but transferred to Punchbowl War Cemetery in Hawaii.

The Taiwanese still remember this devastating event thus a memorial has been established.

After a 10 minute walk from the Memorial, I finally reached the Windmill! To my surprise, that is not a windmill like the one from Bangui Windmill at the northern part of the Philippines. There are polls with the windmills on the top of it. As I lowered my expectation, it was such a relief to see the park in front of the ocean.

Friends and families gathered here to relax. The ocean breeze is soothing to my sore feet and tired body. The Wind Power Park is famous as this is the first wind power generated park in Taiwan. It provides multi-function services for leisure, exercise and environmental protection. It was nice to see people enjoying the park with their loved ones.

As for me, it was joyful to reach a place that I thought I cannot visit. There is not so much things to do at the park just like relaxing, enjoying the ocean breeze and waves, staring at the windmills or having some picnics. Other kids are flying kites with their parents. Taking photos took my time longer here. 😀

There were people selling kites, ice cream and small snack inside the park making it more family oriented place. 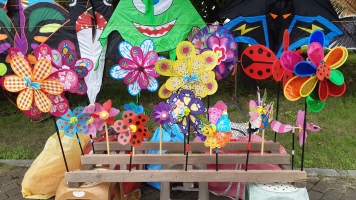 I stayed at the park for more than 30 minutes. After my stay here, I was actually groaning if I will walk back again to the ferry station. Good thing I remembered the signs I saw at the ferry station that there are buses roaming around Cijin.

At the front of the Wind Power Park entrance is a bus stop. In less than 5 minutes, Bus No. 9 arrived. It took me less 20 minutes to reach the ferry station.

It took me 15 minutes to reach the lighthouse entrance gate from the ferry station. I know the climb at the lighthouse will be a tough one as I saw there were stairs sky high when I arrived at the island. 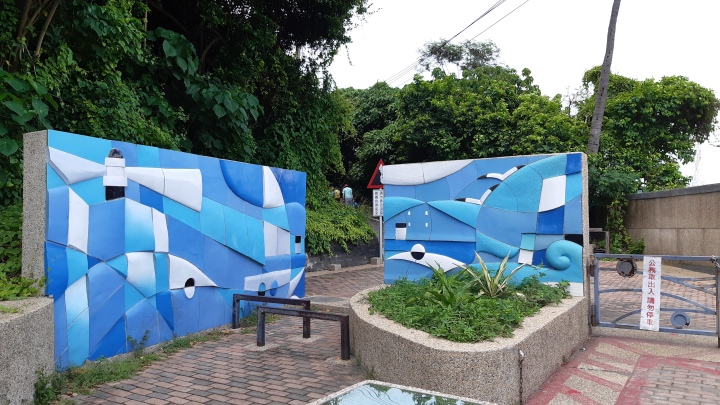 From the entrance of the lighthouse, it took me less than 20 minutes to see the real lighthouse. Maybe my body is already conditioned to climb to the lighthouse after the thousands of walks I made on the entire day thus climbing the lighthouse was a bit easy.

At the top, you will see the small Cihou Lighthouse and an overlooking view of Kaohsiung. It was breathtaking to be on the top after all the walks I had. ❤

Cihou Lighthouse is built on 1883 by British engineer with it’s Chinese-style square red brick. From the Japanese colonial rule, the lighthouse was reconstructed in 1918. As of today, Cihou Lighthouse is one of the main attraction in Cijin Island. It has the best spot to witness the beautiful sunrise and sunset.

My DIY day tour in Cijin has been very exhausting but I am happy that I burnt too much calories that time! Plus, I saved some bucks from all the walking! 😀 It was indeed another milestone with my travels in Taiwan! ❤

Jess is a graduate of Bachelor of Science in Computer Science. She worked as an IT Service Desk Team Lead in an international IT company. She is a solo traveler but never travels alone. She loves to experience different cultures, blend with locals and take photographs. Jess wishes to pack her bags and be one of those who "quit job to travel"! View all posts by Jess Santos